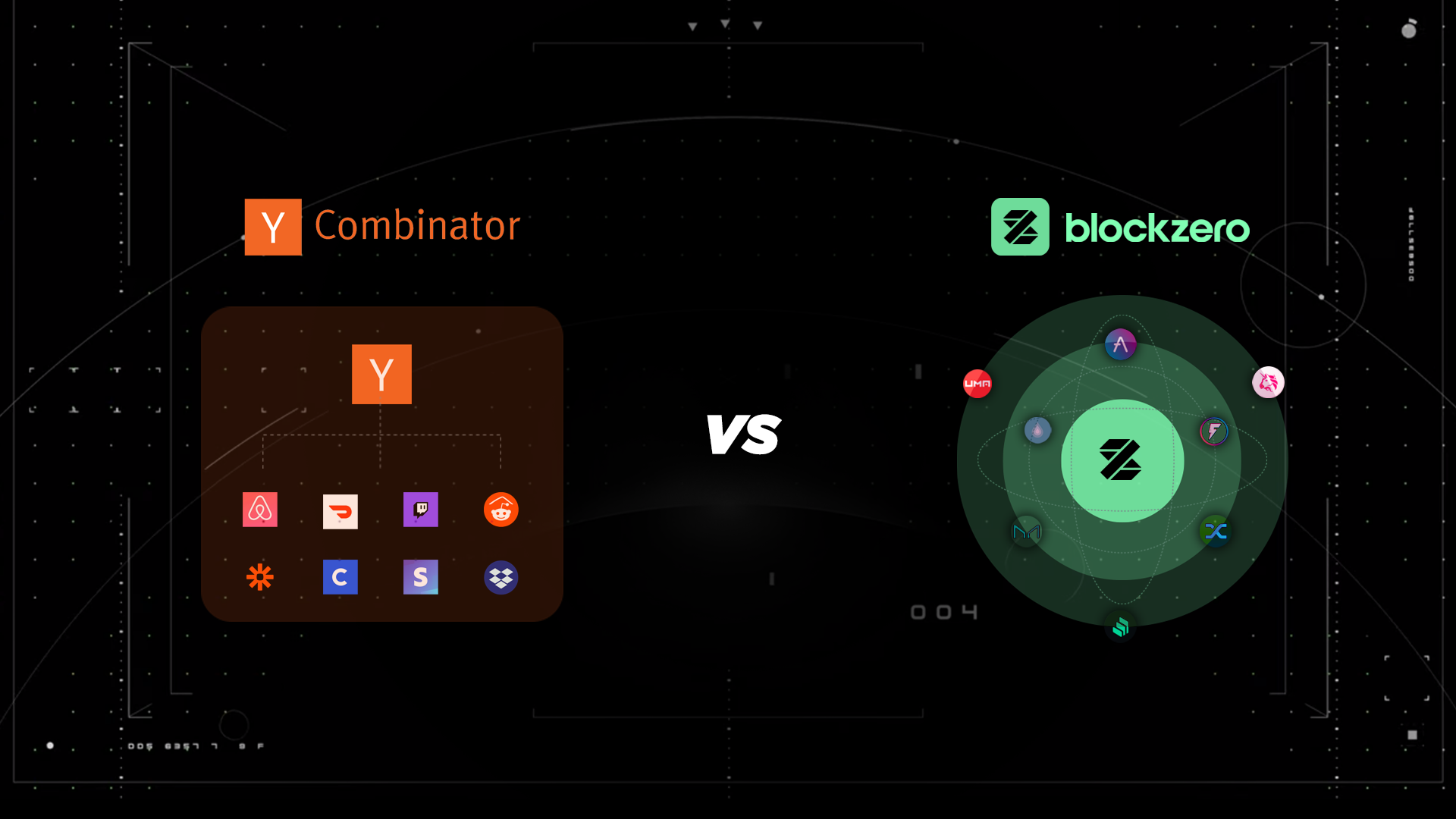 From accelerating Airbnb to Dropbox and thousands of other startups, it took 16 years for the total combined valuation of all Y Combinator companies to reach $400B.

For Ethereum, one single Web3 project, it took less than 6 years.

While the YC model of fueling and funding startups has proven to be a successful one — the evolution from Web2 to Web3 is transforming the speed, process, and formula in how we accelerate ideas into reality.

The rest of the article will list out seven ways in which Web3 is breaking the Y Combinator business model and how we at Blockzero Labs are doing things differently.

A buzzword to some, the mark of a new era of the internet to others — the term “Web3” was a growing trend around the tech scene throughout 2021.

But what exactly differentiates Web3 from Web2?

The following tweet from Chris Dixon breaks it down as follows.

At the base of it, Web3 represents ownership — and the way in which we represent ownership in this new world is through the form of digital tokens.

According to Rahul Garg from Iron Pillar Fund:

“In 10 years from now, many blockchain based Web 3.0 companies will not have any such thing as equity or shareholders.

These are likely to be decentralized autonomous organizations (DAOs) where tokens act as both store of value & currency (on native network). These tokens have the power of cash & equity combined in one & they are highly liquid & freely tradeable in the secondary market (crypto exchanges).

In such companies, Tokens will replace Equity. The trillions of dollars of value that hopefully some of these companies will create will reside with its token holders which would include every participant in the network rather than just the investors, founders & the team.”

If Y Combinator wants to compete in a Web3 environment, it must quickly adjust to accept and incorporate digital tokens into the mix.

Blockzero Labs accepts native tokens from the projects we accelerate. You can learn more about the tokenomics here.

Web3 not only challenges how we define ownership from a technical term, but how people can earn it and who should get it.

In late 2019, we airdropped 100% of the entire circulating supply of Blockzero Labs native token ($XIO) directly to our community members.

In late 2021, ENS airdropped 25% of its entire supply ($ENS) to users if its protocol who had registered an ENS Domain.

The one common theme in the above airdrops is the ownership was highly focused in the hands of the early users and contributors of the projects — not just given to the people who invested early.

That said, we must also understand that ownership is more than just tokens.

Jesse Walden from the Variant Fund calls this transfer of power the “Ownership Economy”:

“As the role of the individual in value creation becomes more commonplace, the next evolutionary step is towards software that is not only built, operated, and funded by individual users — but owned by users too.

The ownership economy doesn’t always mean a literal distribution of tokens, stock options, or equity. It also doesn’t necessarily mean that an application or service is entirely built on a blockchain.

Rather, it means that ownership — which may manifest in the form of novel economic rewards, platform governance, or new forms of social capital — can be a new keystone of user experiences, with plenty of design space to explore.”

In Web3, ownership is heavily weighted towards the community and contributors that make the projects possible to begin with.

This concept of distributed ownership isn’t slowing down anytime soon. If YC wants to compete, it must help projects manage ways to distribute ownership.

All tokens from projects that Blockzero Labs accelerates go directly to our community members of XIO holders for their various contributions.

From the admissions process to the hierarchical structure, YC operates in a centralized manner similar to the startups it serves — and rightfully so.

Centralization allows companies to make quick decisions and make very important contrarian bets that are so important when fostering innovation.

That said, the introduction of DAOs and enabling organizations to operate in a decentralized manner offers many scaling benefits that will be hard for YC to compete with.

While it can be debated if the short-term efficiencies of decentralization, DAOs enable large groups of people to align and interact with both capital and labor.

One example is the ConstitutionDAO (Source: Cryptoslate)

“ConstitutionDAO was launched on November 11 by a group of crypto enthusiasts as an attempt to raise funds via DAO to buy the first printed version of the US Constitution, on auction by Sotheby’s.

This version is the last privately owned copy — of only 13 copies in total — of the Constitution, and ConstitutionDAO hoped to serve as to transfer it to community ownership rather than to a lone wealthy individual.

By November 19, ConstitutionDAO raised nearly 11,000 ETH on JuiceBox, a community funding for people and projects, or just over $45 million — more than twice the estimated sale price of $20 million.”

While the bid to buy the Constitution ultimately fell short, this example of forming so much capital by so many people in such a short amount of time-based on one singular vision shows the power of DAOs at scale.

On July 14th, 2021 — after operating as a centralized entity since 2014, the Founder and CEO of ShapeShift (Erik Vorhees) decided to dissolve his company and turn it into a DAO.

Blockzero Labs operates as a DAO where XIO holders vote on which projects we should create and/or accelerate. View voting here.

With less than 2% of all applicants accepted into Y Combinator, getting into a prestigious Y Combinator batch of startups is worthy of praise.

By definition, this makes the selection process to YC extremely exclusive.

While this may help increase the brand reputation and appeal of YC, exclusivity is antithetical to the principles of Web3 — the decentralized world is built on inclusivity.

In Web3, innovation should be inclusive and permissionless.

The Blockzero Labs decentralized model is inclusive of all ideas with no limits to how many projects can be accelerated.

YC has found a sweet spot for risk/reward by focusing on projects near the seed stage valuations.

At the same time, all startups who apply to YC are given the exact same valuation and capital.

Although it makes sense why Y Combinator does this to save time on negotiations and to streamline the accelerator, this model

Additionally, given how many alternative growth options and how much less capital it takes to get off the ground, projects and founders have much more leverage when valuing their own startup or idea.

The current YC valuation model forces Y Combinator to pass up many opportunities from the most innovative founders and builders.

With Blockzero Labs, the projects set their own valuations and anyone can apply regardless of how early the idea is.

While this three-month program provides structure and guidance to its startups, half of the year there are no opportunities for acceleration.

In Web3, innovation never sleeps, and neither should accelerators.

Whether through an acquisition or an IPO, while YC may, when Y Combinator invests in a startup — it could be months, years, or even decades before this equity becomes liquid.

Investors over the next decade will not just expect earlier liquidity for their owned assets, but demand it.

The next Vitalik Buterin (Ethereum), Stani Kulechov (Aave), or Andre Cronje (Yearn Finance) won’t be applying to a Web2 accelerator.

No longer are entrepreneurs at the mercy of a central group of decision-makers in Silicon Valley to decide their fate but can instead lean on the power of decentralized communities at scale.

Your capacity to turn an idea into reality should not be determined by who you know or how much money you have.

Innovation should be permissionless.

This is why we built Blockzero Labs and what we aim to do.

Blockzero Labs is a decentralized and community-owned accelerator.

We give Web3 projects the community, connections, and capital they need to reach escape velocity.

The native token of Blockzero Labs is $XIO.

Holding $XIO gives you ownership of all projects we create or accelerate.

XIO No Comments
BECOME A CITIZEN JOIN THE DAO